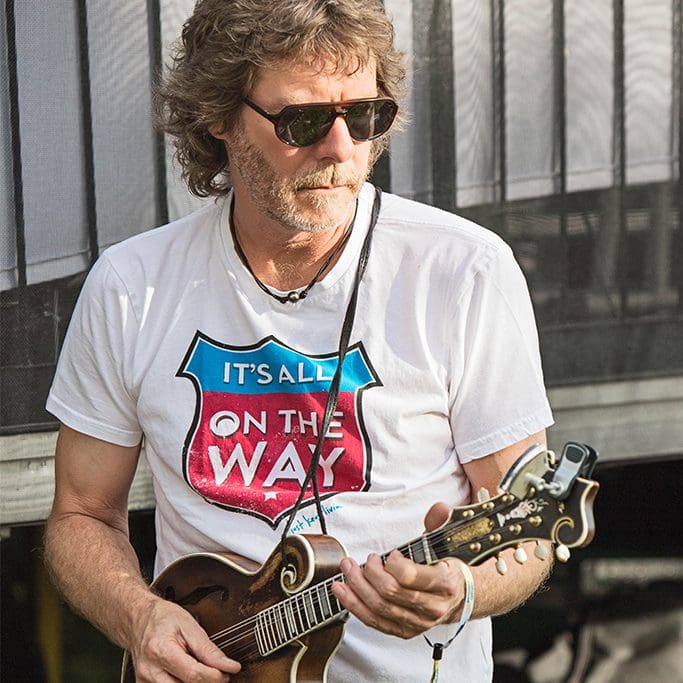 There is only one consensus pick of peers and predecessors, of the traditionalists, the rebels, and the next gen devotees. Music’s ultimate inside outsider. Or is it outside insider? There is only one Sam Bush.

As a teen fiddler Bush was a three-time national champion in the junior division of the National Oldtime Fiddler’s Contest. He recorded an instrumental album, Poor Richard’s Almanac as a high school senior and in the spring of 1970 attended the Fiddlers Convention in Union Grove, NC. There he heard the New Deal String Band, taking notice of their rock-inspired brand of progressive bluegrass.

“I started working at the Holiday Inn as a busboy,” Bush recalls. “Ebo Walker and Lonnie Peerce came in one night asking if I wanted to come to Louisville and play five nights a week with the Bluegrass Alliance. That was a big, ol’ ‘Hell yes, let’s go.'”

Bush played guitar in the group, then began playing after recruiting guitarist Tony Rice to the fold. Following a fallout with Peerce in 1971, Bush and his Alliance mates- Walker, Courtney Johnson, and Curtis Burch- formed the New Grass Revival, issuing the band’s debut, New Grass Revival. Walker left soon after, replaced temporarily by Butch Robins, with the quartet solidifying around the arrival of bassist John Cowan.

Bush was the newgrass commando, incorporating a variety of genres into the repertoire. He discovered a sibling similarity with the reggae rhythms of Marley and The Wailers, and, accordingly, developed an ear-turning original style of mandolin playing. The group issued five albums in their first seven years, and in 1979 became Russell’s backing band. By 1981, Johnson and Burch left the group, replaced by banjoist Bela Fleck and guitarist Pat Flynn.

“With this band I have now I am free to try anything. Looking back at the last 50 years of playing newgrass, with the elements of jazz improvisation and rock-&-roll, jamming, playing with New Grass Revival, Leon, and Emmylou; it’s a culmination of all of that,” says Bush. “I can unapologetically stand onstage and feel I’m representing those songs well.”