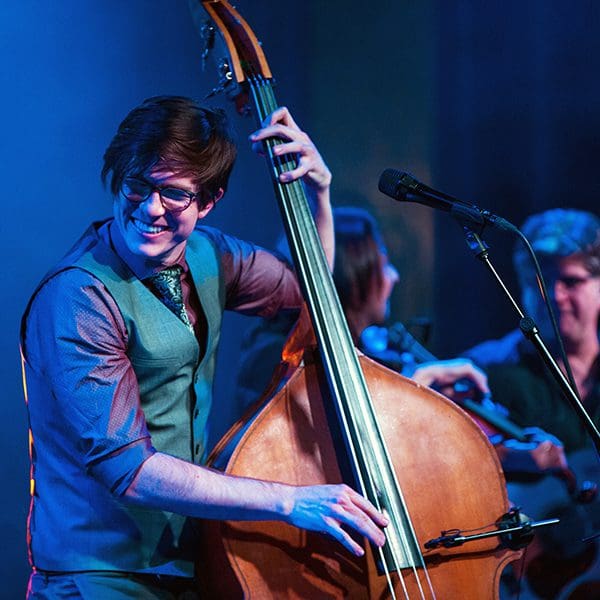 Mulvahill is acclaimed for his work alongside icons like Ricky Skaggs and Bruce Hornsby and has shared the stage with greats like Alison Krauss, Barry Gibb of the BeeGees, Brad Paisley, Peter Frampton and many more. Scott and his band will headline this AcA NXT show after The Rayo Brothers for an intimate and dynamic evening in the James Devin Moncus Theater.

For the past decade, Scott Mulvahill has left his unique mark on the intersecting worlds of Americana, bluegrass, folk, jazz, rock & roll, and roots music.

Raised in Houston, Mulvahill cut his teeth as a member of Ricky Skaggs’ acclaimed band, Kentucky Thunder. The group toured internationally for five years, backed by the bottom-heavy pulse of Mulvahill’s upright bass. Along the way, he also composed music of his own, shining a light on the genre-jumping influences — Paul Simon’s sophisticated pop, James Taylor’s folk, Jaco Pastorius’ innovative jazz, and more — that would eventually inspire the material on his solo debut, Himalayas. His performances as part of Skaggs’ nightly shows laid the brickwork for Mulvahill’s transition from hotshot sideman to compelling frontman.

Encouraged by musical mentor Bruce Hornsby, Mulvahill developed a unique approach to his songwriting — one that mixed his chops as an upright bassist with hook-heavy melodies and compelling narratives. Himalayas spotlights that distinctive style. A true “musician’s musician,” Mulvahill fills his solo debut with complex fingerwork and innovative progressions. At the same time, Himalayas is a song-driven record that focuses its attention not upon Mulvahill’s virtuosity, but upon the sheer listenability of his material. This is acoustic-leaning roots music of the highest caliber, shot through with elastic vocals, dobro, fiddle, and the honest, biographical lyrics of a songwriter who gave up an enviable position in Skaggs’ band to pursue his own muse.

“I wanna go over where I’ve never been,” he sings during the sparsely-decorated title track, one of several tracks to deal with the universal themes of facing one’s fears, taking leaps, and chasing down new horizons. Those messages are reflected in Mulvahill’s own career, as he pioneers a sound centered upon his voice and upright bass.

“As important as the bass is to the sound of my music, it’s not a crutch,” he says. “To me, the songwriting, the voice, and the message are what really matter. Himalayas is based upon this idea that there’s more to your life than your current challenge — that any setback is surmountable. There’s a ‘we’re in this all together’ mentality to these songs.”

Although bound together by universal themes, Himalayas also makes room for a diverse range of sounds. “Begin Againers” kickstarts the album with several bars of gorgeous a cappella, while “Gold Plated Lie” nods to the galloping urgency of rock & roll. Elsewhere, Mulvahill duets with Alanna Boudreau during a gospel-inspired cover of Paul Simon’s “Homeless,” then serves as a one-man band during tracks like “Fighting for the Wrong Side” and “Indefensible.” Together, these songs bridge the gap between disparate worlds — roots music, chamber music, free jazz, classic pop, and beyond — with ease and eclecticism.

“For years, I had a split personality to my music career,” says Mulvahill, whose solo career has already racked up a long list of milestones, including a tour with recent multi-Grammy winner Lauren Daigle, an NPR Tiny Desk concert, and a performance on the Mountain Stage radio show. “I was known as a bass player, but I was also a singer-songwriter. Himalayas combines those two halves together. It makes a statement about what can be done with an upright bass, while leaving room for me to explore other sounds on future albums.”

For a lifelong musician like Scott Mulvahill, the climb is never over. Himalayas marks his latest summit, showcasing the work of a songwriter whose songs swoon, soothe, and startle in equal measure.

Daniel and Jesse Reaux began performing as The Rayo Brothers at a songwriter competition in their home town of Lafayette, Louisiana. Joined by bandmates Lance Kelehan and Jordan Ardoin, the brothers present “honest and insightful” songwriting against a backdrop of “impassioned folk rock and modern alt-country with majestic, sweeping arrangements” (Offbeat Magazine). Featuring sibling harmonies and a variety of instrumentation, they put on a rollicking show that flows from raucous foot-stompers to intimate ballads and everywhere in between.

The Rayo Brothers’ latest album “Victim & Villain” was recorded at Dockside Studio with Grammy-winning engineer Tony Daigle and Grammy-winning producer Louis Michot (of Lost Bayou Ramblers) and released in 2019 on Nouveau Electric Records. Glide Magazine says “Victim & Villain” is “one of the most exciting country music releases so far this year.”

This show is part of the AcA NXT series that showcases national and local emerging artists and aims to build AcA’s next generation of patrons.