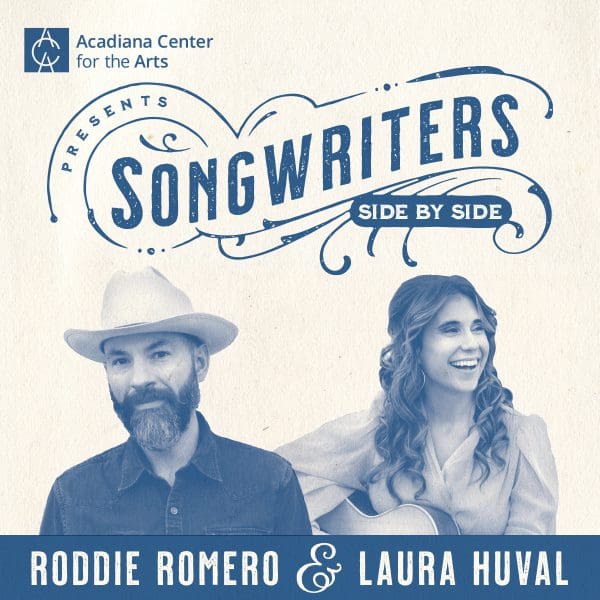 This intimate evening will feature an outdoor concert with performances from Roddie Romero and Laura Huval. Attendees will dine on delicious food provided by Chef Brian Johnson of Maison Stèphanie, enjoy festive cocktails, and peruse beautiful artwork provided by local artists in a silent auction benefiting the artists as well as the AcA.

Laura Huval is a Grammy nominated recording artist and producer, an award-winning songwriter, vocalist, story-teller, cultural activist, author, music minister, keynote speaker, a wife and mother, and founder of the Al Berard Memorial Music Foundation. Laura is a native of the culturally rich community of Cecilia, Louisiana. In 2021, Huval’s band, Sweet Cecilia, was nominated in the Best Regional Roots Music Album for “A Tribute to Al Berard”. She was nominated for the 2021 OffBEAT Magazine “Best of the Beat Awards” in two categories: Best Gospel Artist and Best Country/Folk/Singer-Songwriter Artist. In February 2021, Huval released her first Devotional Book, Scripture and Song:40 Day Reflection Devotional. It is a culmination of Huval’s gifts of ministering and teaching through faith-based music. This devotional is a prayer companion for Laura Huval’s 2020 album, It’s Never Too Late.

She also performs with her husband, accordionist, Adrian Huval of the Louisiana based group, The Bluerunners. She and her husband have two sons, Nate and Rex, and reside in Cecilia, Louisiana.

Born, raised, and currently residing in Lafayette, LA Roddie Romero lives and breathes South Louisiana culture. His passion for authenticity shows in multiple aspects of his life, from his music with The Hub City All Stars to what’s cooking in his cast-iron black pot. But before the celebrated frontman had a Grammy nomination and multiple international tours under his belt, he was witnessing the magic of Cajun and zydeco music in his own backyard.