The ancient Greek myth of Orpheus, who attempts to harness the power of music to rescue his beloved Eurydice from the Underworld, has inspired composers since opera’s earliest days. Brilliant American composer Matthew Aucoin now carries that tradition into the 21st century with a captivating new take on the story—a product of the Met’s commissioning program. With a libretto by Sarah Ruhl, adapted from her acclaimed 2003 play, the opera reimagines the familiar tale from Eurydice’s point of view. Yannick Nézet-Séguin oversees the momentous Met premiere from the podium, leading Aucoin’s evocative music and an immersive new staging by Mary Zimmerman. Soprano Erin Morley sings the title role, opposite baritone Joshua Hopkins as Orpheus and countertenor Jakub Józef Orliński as his otherworldly alter-ego. Bass-baritone Nathan Berg is Eurydice’s father and fellow resident of the underworld, with tenor Barry Banks as Hades himself.

Orpheus is almost the archetypical operatic tale, and composers throughout history have adapted it for the operatic stage. But in his evocative new opera, celebrated American composer Matthew Aucoin reimagines the story from Eurydice’s point of view and imbues these familiar characters with surprising new dimensions.

Matthew Aucoin, a conductor, pianist, writer, and, most notably, composer, is an emerging force in music and formerly served on the Met’s music staff from 2012 to 2014. He was honored with a MacArthur Fellowship in 2018 and served as LA Opera’s first-ever artist-in-residence. Playwright, professor, and essayist Sarah Ruhl, also a MacArthur Fellow, created the libretto for Eurydice, adapting her highly successful 2003 play.

The opera takes place in both the world of the living and the world of the dead, as well as in the space between. It is not set in any specific time period, suggesting that this myth can, and does, take place in all eras. 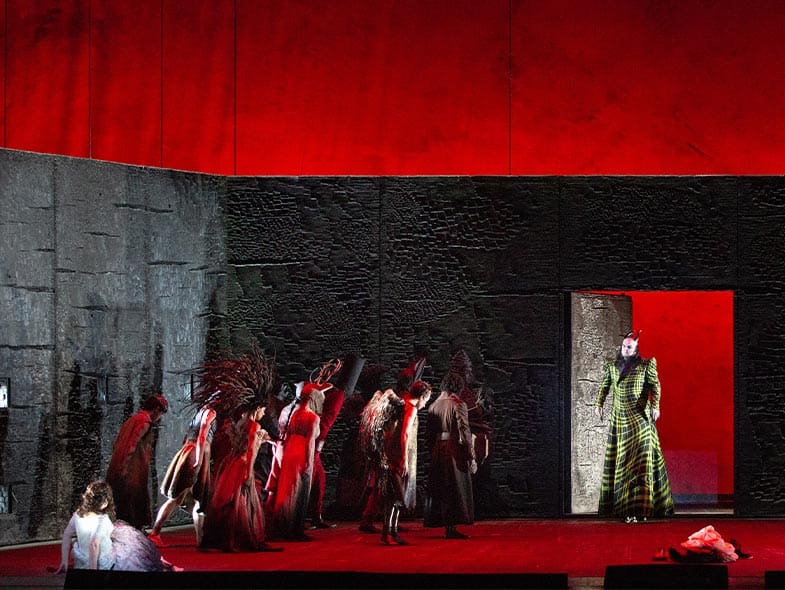 The score of Eurydice creates a world analogous to the tale: equally at home in both the realm of appearances and in the deep subconscious. The impressive vocal solos range from the witty to the emotional, and the writing for orchestra and chorus is notable for its rich coloration. One of the most striking aspects of the score is the use of two singers in intertwining musical lines to express the dual character of Orpheus.