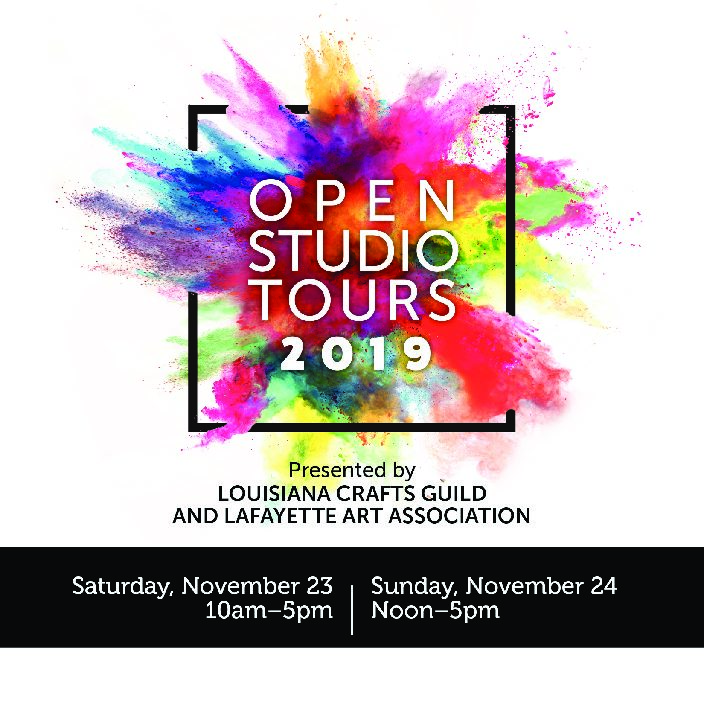 This annual exhibition brings together artworks by over 50 artists and artisans participating in the regional Open Studio Tours on November 23rd & 24th.

A Little Bit of Tour History

The Open Studio Tours began back in 1971 when a group of ten artists decided to organize a way for the general public to see their works, both finished and in progress. They wanted not only to display their art, but to also show how those works were produced. Thus, the first Open Studio Tour was born.

Among those first ten artists to open their workshops to the public were George Rodrigue, Rollin Tyrell, and Sara Parker. Rodrigue was a young artist at the time, very pre-Blue Dog, and his work was described as depicting dark rural Louisiana landscapes. Although his Blue Dogs became wildly popular later in his career, his older works are also treasured. Some of them were undoubtedly on display on that first Tour, and very likely purchased by early collectors.

Rollin Tyrell was a craftsman who did aluminum castings. His sculptures were often abstract in nature, and were one of a kind because of his use of assorted extraneous objects when modelling the molten aluminum. Suzanne and Pat Juneau are among the local collectors who have samples of works. Tyrell is the grandfather of sculptor Kelly Guidry of Breaux Bridge, who begins his works with the help of a chainsaw. Kelly will be on the 2018 Tour, and he chaired the 2003-2005 Tours.

Sara Parker, the only surviving artist from the original Tour, is still producing wonderful watercolors, despite being “of a certain age.” Her works have an oriental flavor and serenity to them, and in the words of one collector, “They have a very calming effect on me.” One of her many fans might have purchased a painting from her on that first Tour, or gotten to observe her technique on a work in progress.

The Tours were held annually over the years, with the occasional hiatus as the artists and craftsmen sometimes failed to agree on how the Tours should be handled, and volunteers were hard to find. The latest hiatus ended three years ago when the Louisiana Craft Guild and the Lafayette Art Association joined forces to reactivate the Tours.

Under the leadership of Burnell Lemoine, and with the cooperation and assistance of the Craft Guild, the Art Association, the participating artists and craftsmen and a host of volunteers, the 2016 and the 2017 Tours were a huge success, and the 2018 Tour promises to be even bigger and better.

In preparing for the 2018 Tour, Tour Chairman Lemoine expressed his gratitude to everyone involved, and particularly recognized the help provided by the Lafayette Conventions and Visitors Commission, the Louisiana Economic Development Authority, Right Angle Advertising, and the Acadiana Center for the Arts.

For more details on the tour visit https://www.openstudioacadiana.com/