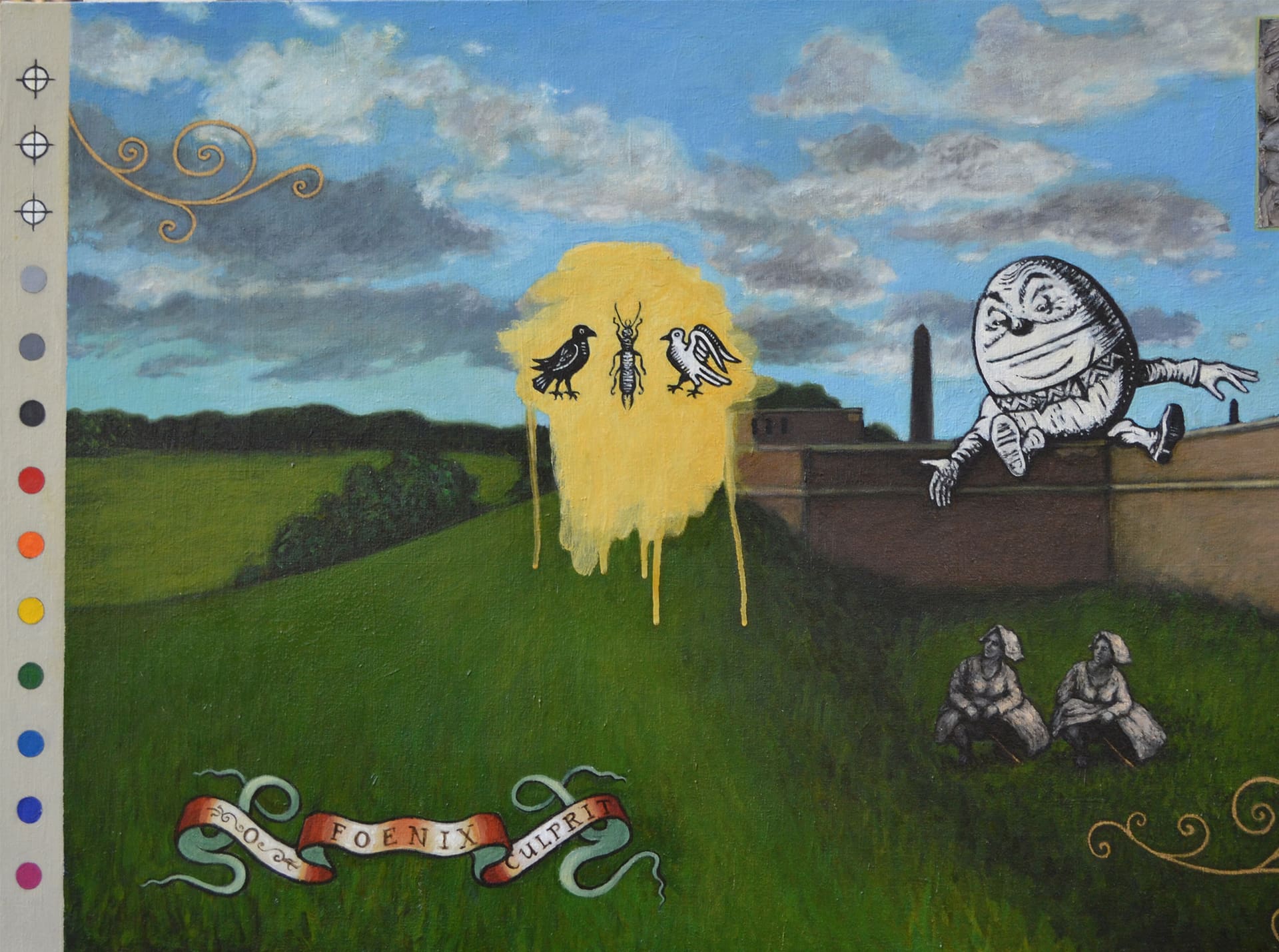 Quiddity: the inherent nature of an object: its whatness, the essence of an object, that thing-about-a-thing- that-makes-it-what-it-is

The paintings in this exhibition have their footing in the objects of my home. My studio is located centrally, in what should be the dining room, of my house. Instead of an easel, I use two solid core doors positioned against a wall. Large canvases are leaned against the doors. For smaller ones I hammer in a couple of nails and hang the canvas stretchers upon them. The doors have gradually accumulated many found objects, keychains, a few mirrors, notes and drawings, lead weights, rulers, and a line-up of tchotchkes. These objects often become part of the subject matter of my paintings and drawings, so it is fitting that the doors themselves should be a part of this exhibition.The work in this show spans a thirty year period and all of it has been made atop these doors.

Still life painting and works made in response to James Joyce’s UlyssesandFinnegans Wake, are the two broad, often overlapping, categories of the exhibition.

The connection between still life subject matter and the writing of James Joyce lies in his meticulous descriptions of commonplace objects. Wyndam Lewis criticized Joyce’s Ulyssesfor its “amount of stuff—unorganized brute material” which he says bogs down the dramatic action. This stuff he says is “a suffocating moetic expanse of objects, all of them lifeless, the sewage of a past twenty years old, all neatly arranged in a meticulous sequence.” (Wyndam Lewis,Time and Western Man, 1927, Page 91) Joyce’s love of objects is part of what draws me to his writing.

As Joyce showed, stories can be told with objects. Narratives are embellished with objects. It was famously said that if the city of Dublin were destroyed that it could be reconstructed on the basis of Joyce’s descriptions. And in Finnegans Wake, there are so many brand name products mentioned that it has nearly a pop sensibility. Here is one example: “deltoid drops, curiously strong,” FW210.9. All at once in this phrase Joyce references a river’s delta, the deltoid shoulder muscle, and Altoids, the curiously strong breath mint.

My still life paintings incorporate traditional vanitas symbols: items such as clocks, skulls, candles, and soap bubbles which are intended to remind the viewer of the brevity of life. I am also developing a personal vanitas vocabulary with imagery of dice, midden heaps, mirrors, trophies, toys, origami, and found paper ephemera.

Born in New Haven, Connecticut, Heather Ryan Kelley is a professor of art at McNeese State University where she teaches painting and book arts. She holds a BFA in printmaking from Southern Methodist University and an MA in painting from Northwestern State University.