Masks required! In accordance with the State of Louisiana indoor mask mandate, masks will be required for all attendees.

The blues is music for all time—past, present, and future—and few artists simultaneously exemplify those multiple temporal moments of the genre like North Mississippi’s Cedric Burnside. The Mississippi Hill Country blues guitarist and singer/songwriter contains within him the legacy and future of the region’s prescient sound stories. At once African and American and southern and Mississippian, these stories tell about love, hurt, connection, and redemption in the South. His newest contribution to this tradition is I Be Trying, a 13-track album treatise on life’s challenges, pleasures, and beauty. “Life can go any kind of way,” Burnside says. With almost 30 years of performing and living blues in him, he would know.

Burnside’s blues inheritance, the North Mississippi Hill Country blues, is distinct from its Delta or Texas counterparts in its commitment to polyrhythmic percussion and its refusal of familiar blues chord progressions. Often, and especially in Burnside’s care, it leads with extended riffs that become sentences or pleas or exclamations, rendering the guitar like its West African antecedent, the talking drum. Riffs disappear behind and become one with the singer’s voice, like the convergence of hill and horizon in the distance. Sometimes they become the only voice, saying what the singer cannot conjure the words for. Across some nine individual and collaborative album projects, Burnside’s voice eases seamlessly into, through, and behind the riffs spirit gifts him, carrying listeners to a deep Mississippi well. There is mirror there in the water of that well, in Burnside’s music, that shows us who and what we have been, who we are, and what we might be if we look and heed.

The 42-year-old Burnside was born in the blues as much as he was in funk, rock, soul, and hip-hop. These latter sensibilities are reflected across his work, as he drives Hill Country blues into grooves that lend themselves readily to an urgent, modern moment. But he is also keenly his grandfather’s grandson, who he studied so carefully over a decade playing with him that he came to know him better than his own self. The elder Burnside blues man, the hill country blues luminary RL Burnside, and his wife Alice Mae wrapped their Holly Springs land and family in warmth, joy, and music. RL Burnside, alongside collaborators and contemporaries from David “Junior” Kimbrough to Jessie Mae Hemphill and Otha Turner, cultivated the sound and feeling of Black North Mississippi life and offered it up to the world. Cedric observed and absorbed this art world intently and with wonder as a child, declaring to himself, this is the music I want to play and I want to do that for the rest of my life. Moreover, this was the offering he, too, wanted to make, and the life of service to the spirit through blues that he wanted to live. By age 13, he was on the road with his “Big Daddy” Burnside, playing drums, being raised up by the music and the road, and developing the next, electric generation of the Hill Country calling and sound.

Burnside’s two Grammy-nominated album projects— the 2015 Descendants of Hill Country and 2018’s Benton County Relic—were both capstone statements for a lifetime of musical labor channeling the blues spirit on drums, guitar, and vocals in the North Mississippi Hill Country tradition. I Be Trying, Burnside’s second release with Alabama’s Single Lock Records, is another unfolding of his influence and voice as an architect of the second generation of Hill Country blues. This album pushes just beyond his long-time roles as Hill Country blues collaborator, torchbearer, and innovator into the rooms of the artist’s inner life. Written in reflection on and off the road in 2018, the album responds to the confusion and anger he felt in the years after a series of deaths in the family and a host of other interpersonal hurts, some he dished out and some he took. The album opens with an acoustic lament, “The World Can Be So Cold,” that encapsulates the tenderness of this pain and then quickly rallies and pleads with the Lord for help on the rousing second track and the album’s first single, “Step In.” The title track, on which Burnside is accompanied on background vocals by his youngest daughter Portrika, is a plea for grace and forgiveness from a man “still learning and trying to be the best me.” Burnside’s signature approach and contribution to the Hill Country genre—electricity, intention, and timeless timbre—is seamlessly complemented here by star collaborators Alabama Shakes bassist Zac Cockrell, North Mississippi Allstars guitarist Luther Dickinson, and principal collaborator Reed Watson on drums. 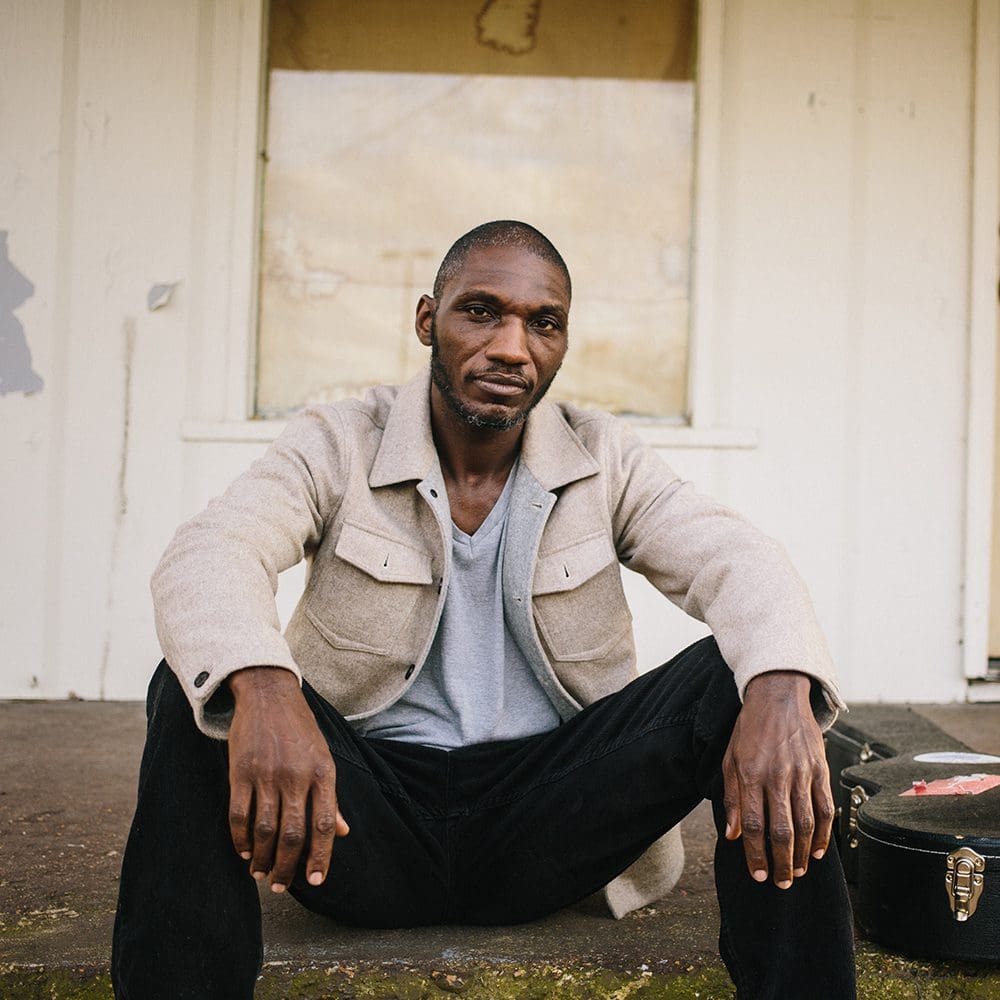 With lessons to impart, Burnside strips down the sound with precision so there can be no misunderstanding, allowing for space and breath where otherwise chords and reverb might be present. This portion of the offering is a guidebook for life’s dark times, set to mostly minor riffs and pulsing bass and percussion rhythms that immediately set in the soul like the gospel. If you wake up on the wrong side of the bed, “Ask the Lord for revelation/so [you] can see clearer” and “keep on pushing as hard as [you] can,” he advises to a march on “Keep On Pushing”; “Be careful who you talk to/ain’t no telling what they might do” he warns on “Gotta Look Out” over a menacing bass eighth-note couplet on the one and three. Recorded over a few sessions at Royal Studios in Memphis with lifelong friend and fellow North Mississippi descendant Lawrence “Boo” Mitchell, I Be Trying is Burnside boiled down by a fiery blue anger from descendant to relic to human.

What is left, and this is everything, is a resonant kind of love. Buoyed by his readings of Lao Tzu and rumination on his own life choices and hurts, Burnside says he is “trying his best to implement love” in his life and in relationships with others. “There’s not enough love shown in the world. People have a lot of regret. The world needs more love.” In the places where love glistens on the album’s surface, like in the harmonies on the anthem groove “Love Is the Key” or in the smooth, purposeful falsetto sliding over the strings on the final track, “Love You Forever,” Burnside’s desire for us all to “really just try to come closer” is palpable.

But this is the blues, so love is necessarily double-edged. On two covers, one of RL Burnside’s “Bird Without a Feather” and another of Junior Kimbrough’s “Keep Your Hands Off Her,” which Burnside titles by its signature opening threat, “Hands Off That Girl,” there is hurt and fear, quiet menace and outright threat. “Dark,” he admits, “but what people go through.” Flashing this side of love’s sword, Burnside reminds us of the complex, raw, blues people legacy that undergirds his art. Still, he says on the soaring “Love Is Key,” which is his thesis as of late, “a life filled with love is the key/yes it is.”

Blues is an embodied practice that frequently crosses the boundaries of reality and fiction, and as such, Burnside appears as himself in Bill Bennett’s Tempted (2001), a New Orleans-set thriller; Arliss Howard’s Mississippi-based romantic comedy Big Bad Love; and Craig Brewer’s Tennessee-based drama Black Snake Moan (2006). He also can become something other than himself. In 2021, Burnside played the title character in Don Simonton and Travis Mills’ story of Texas Red, a Franklin County, Mississippi juke joint owner who, after defending himself from an attack, was hunted by a mob for a month and eventually caught and killed. Burnside brings a bluesman’s haunted gravitas to the role, balanced about life and death and freedom even in the most unspeakable moments. Like his music, this role is ancestral blues work that honors the dead and their legacies to teach and heal new generations.

Burnside recalls chopping wood and hauling water as a child, and these days he is in his garden growing food and contemplating getting some chickens. This penchant for cultivation and innovation that has always characterized his music spills over to the land, and especially in this moment of shift wrought by pandemic life. On a hunting trip to Montana, Burnside connected to nature, as well as his interior life, in a new way. This feeling, one of opening, was a revelation to him. It underscores his love strivings and, along with his studies of the Dao, even changes how he structures and writes songs. It is a process of “realizing what was already there,” he says, of remembering. Love is key, and love is work.

Burnside’s turn inward has him considering his place in the family legacy of professional blues musicians. He is a proud father of three daughters, ages 22, 18, and 15, all of whom can play drums and guitar, and is looking forward to more collaborations like the one with the youngest Burnside daughter on “I Be Trying.” Striving for transparency with his children about his own life, he lets them know not to be too hard on themselves. He says Big Daddy always took care of his family, including his 13 children and several grandchildren and great grandchildren. Despite his touring schedule, Burnside is deeply grateful for his capacity to support and be present for his own children. About this, he says, “I have been there, and I will be there.” That’s for certain about the past, present, and future of the North Mississippi Hill Country blues, too.

Music and more at https://www.cedricburnside.net/